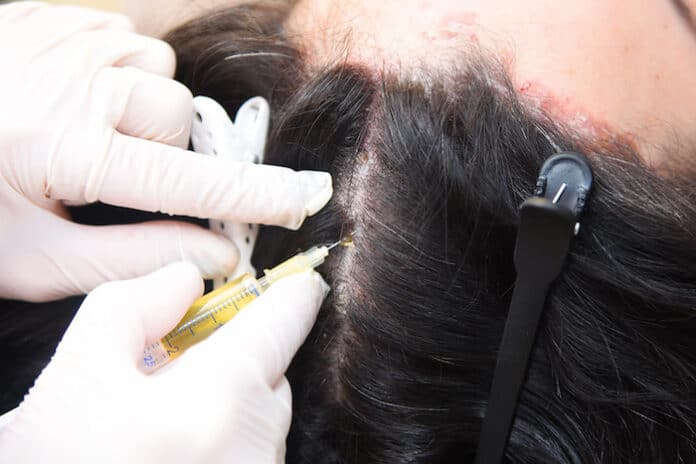 It’s normal to shed some hair on a daily basis. But if you’re not even in your 50s and notice bald patches around your head or lose lumps of hair by the handful, you may be a victim of hair loss.

There are many factors that lead to temporary hair loss, including aging and stress. However, autoimmune disease is most likely to blame for long-term hair loss in young adults.

Up to 23.5 million Americans are afflicted with various types of autoimmune diseases, according to the Autoimmune Registry. Of the said figure, 450,000 suffer from alopecia areata, an autoimmune disease that causes sudden hair loss.

In this article, we’re going to discuss how autoimmune diseases can impact hair loss and explore the other causes of excessive hair shedding.

How Does An Autoimmune Disease Trigger Hair Loss?

The immune system typically recognizes bacteria, viruses, and other foreign bodies, fighting them to prevent infection. If you have an autoimmune disease, your antibodies attack your own body, mistakenly identifying it as a foreign object. Some disorders attack a specific part of the body, such as the scalp and hair follicles in alopecia areata, or the joints in rheumatoid arthritis. Most autoimmune disorders, though, attack the whole or several parts of the body.

Hair loss is the most common side effect of autoimmune disease because one of the ways the body preserves energy is by shutting down some of the normal processes, including hair growth.

Autoimmune Diseases That Cause Hair Loss

In this autoimmune disorder, the body attacks the hair follicles and other healthy parts of the body, causing sudden hair loss. Other than the hair on your scalp, alopecia areata can also cause hair fallouts in one’s eyebrows and eyelashes.

Hair loss in alopecia areata sufferers occurs when the antibodies attack the hair follicles, which leads to the body’s rejection of the hair shaft. Because the hair shafts are no longer recognized by the body, they eventually fall out.

A chronic autoimmune disease, lupus afflicts different organs and systems in the body. Over 1.5 million people in the US struggle with lupus symptoms, which include fatigue, headaches, joint pain, anemia, and hair loss. Skin inflammation on the face and scalp is also a hallmark symptom of lupus, which can also cause one’s hair to thin out.

Hair loss caused by lupus refers to the breaks in the hair along the hairline, which make it look like you’ve had a really bad haircut. Like alopecia areata, lupus can also cause hair loss in eyelashes, eyebrows, and in men’s beards.

Scientifically known as chronic lymphocytic thyroiditis, Hashimoto’s disease is the leading cause of hypothyroidism, where the thyroid glands fail to produce adequate hormone levels to regulate metabolism. Erratic hormone production not only impacts metabolism but other regular normal body processes, including hair growth.

Hormone production problems cause dry, brittle hair, which may become prone to hair thinning and, eventually, hair loss. The good is news is that hair fallouts caused by Hashimoto’s disease can be resolved once your thyroid levels are corrected.

Other Reasons for Hair Fallouts

Known for the medical term androgenetic alopecia, male pattern baldness affects both men and women. In the US, some 50 million males and 30 million females suffer from hair loss, according to the National Institutes of Health. Certain genes and hormonal changes are to blame for this condition. So, if you see a close relative who suffers from hair problems, you’re likely going to have the same predicament.

In addition to minoxidil, Propecia or Finasteride, is a prescription medicine used to treat male pattern hair loss and benign prostatic hyperplasia. Take note that clinical studies from the FDA showed that Finasteride use showed efficacy in adult men, but it may not be effective in other categories.

Because our cells no longer reproduce the same way when we were younger, it’s normal for our hair to thin out and break easily. Eventually, our hair follicles will stop producing hair, which worsens the situation.

Certain genes and hormonal imbalance aren’t the only culprits for hair loss in both men and women. If you’re often in the hair salons for various “treatments” or often tie your hair in a ponytail or can’t do without cornrows, it won’t take long until your hair follicles become damaged due to traction alopecia.

What Are the Treatments for Hair Loss?

Some doctors recommend minoxidil and other hair loss supplements to help you grow your hair back. Others suggest a series of corticosteroid injections to the scalp or a relatively new nonsurgical method called platelet-rich plasma injections, which tricks your body into creating fresh cells, promoting hair growth.

There are many reasons for hair loss but some medications are available to help you grow your hair back. While some hair loss triggers may be treated with medications, symptom management is the only foreseeable solution in few cases.

How to Estimate a Construction Project: Main Tips for Contractors and Estimators

Everything You Need to Know About Tencel Mattress Protectors: Benefits, and More