The Dad Approach to Having the Period Talk 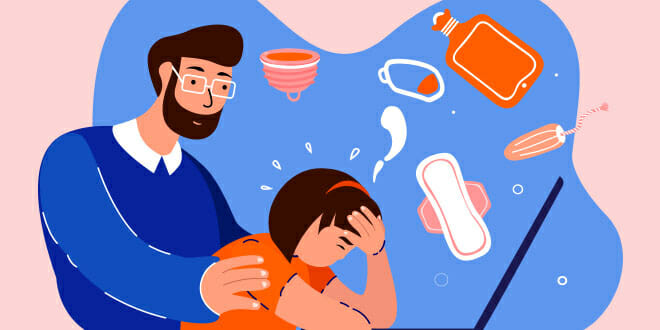 (BUSINESS WIRE)–Being a dad has its challenges but being a single dad of a teenage daughter comes with its own set of challenges – especially when it comes to coping with puberty and the topic of menstruation.

After receiving numerous questions from single dads about how to talk to their daughters about menstruation, INTIMINA, a brand dedicated to caring for women’s intimate health and breaking taboos, went a step further and conducted a survey* of dads in the US, UK, France, Italy and Spain with daughters between the ages of 10 and 15. The goal of the survey was to determine how much dads know about the menstrual cycle and how comfortable they are talking to their daughters about it.

The results are encouraging. According to INTIMINA’s survey, 78% of dads have spoken to their daughters about the menstrual cycle. In comparison, 22% have had no conversations about it at all.

But not all dads are comfortable having the period talk. The survey shows that a large percentage of dads feel that the menstrual cycle is an awkward topic to discuss with their daughter: 63% in the US, 57% in the UK, 44% in France, 38% in Spain and 34% in Italy.

Menstruation is a sensitive topic for both dads and daughters. As teenage girls go through various hormonal and physical changes, starting these conversations might seem everything but easy. When asked who is more likely to bring up the conversation around menstrual cycles, 43% of dads said it would be them, 39% said it would be their daughter and 17% said that neither of them is likely to bring this up.

Most dads surveyed feel comfortable talking to their daughter about menstruation (64%). However, still, 14% feel uncomfortable and explain why: 53% find the conversation awkward, 39% find the conversation sensitive, 34% worry their daughter will ask a question they don’t know the answer to, 32% worry they will say the wrong thing, 32% do not know enough about the subject and 21% can’t relate.

When asked where they would go to get more information and learn about the menstrual cycle, most of the surveyed dads in each country said they would ask another female family member: 64% in the US, 61% in the UK, 55% in Italy, 52% in Spain and 40% in France.

The times are changing. INTIMINA’s survey shows that menstruation is becoming less taboo. It is encouraging that most dads and single dads understand they need to know facts about the menstrual cycle to show support and love for their growing daughters.

For anyone who needs a bit of reassurance and additional education when it comes to period talks, INTIMINA’s The Wonder Girls Guide Book can come in handy when starting conversations with pubescent children.

Established in 2009, INTIMINA is Swedish brand complete line of products for women’s intimate well-being. With three care ranges – Menstrual Care, Pelvic Floor Strengthening, and Feminine Wellness – INTIMINA has products for women of all ages. Every product is made from the highest quality body-safe materials, and has been designed and tested with the support of a worldwide group of medical consultants and gynecologists.

*INTIMINA’s survey of 1,258 dads with daughters aged 10-15 across the UK, USA, France, Italy and Spain was conducted by Censuswide in July 2022.