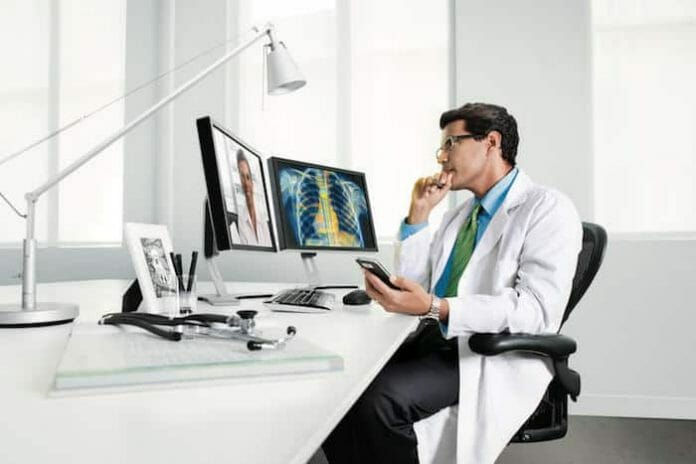 Where telemedicine and remote patient monitoring are concerned, the future is now. If for years both were part of the long-term strategic vision at many healthcare facilities, they have become essential tools during the coronavirus pandemic.

From the earliest days of the outbreak, increased implementation of those technologies became the norm. They represented a safety measure, a method of adhering to social-distancing guidelines. They were also a work-around when governmental lockdowns were imposed on long-term-care facilities, and a means for hospitals to deal with a glut of patients.

One example would be Stanford Medicine, which according to an official went from seeing 1,000 patients a week via telehealth platforms to seeing 3,000 a day. Another would be Cal-Davis, which conducted 132,400 virtual visits with patients in 2020, after holding just 1,200 the year before.

A recent survey undertaken by the outsourcing provider Sykes Enterprises showed that while 20 percent of Americans had experienced some form of telehealth in March 2020, that total had risen to 61 percent by March 2021.

All of this represents “a new era in medicine,” as Jessica Sweeney-Platt, Vice President of Research and Editorial Strategy for the health tech company Athenahealth, told USA Today. Dr. Steve Ommen, Medical Director of the Mayo Clinic for Connected Care, agreed, saying in a news release that the emergence of telehealth has “opened everyone’s eyes as the potential to deliver healthcare in much more safe and convenient ways.”

“I think that years from now, we will point to 2020 as the year that the potential of digital care delivery became a reality, as long as the regulatory and reimbursement environment is conducive to its growth.”

The Allure Group, a network of six New York City-based skilled nursing facilities, has long reaped the benefits of telemedicine and RPM, notably through its use of Vis-a-Vis technology. Hand-held devices are dispensed to patients upon their discharge, allowing them to contact healthcare professionals, and vice versa. Both can track vital signs of the affected party, and potential problems can be nipped in the bud.

Indeed, such gadgetry is central to telemedicine/RPM, as are devices like glucometers, blood pressure cuffs and, for that matter, scales. Wearables will continue to loom large in the field, and developments are ongoing. Early in the pandemic, for instance, a startup known as Biofourmis announced it was contributing its wearable and artificial intelligence technology to a national COVID-19 surveillance program in Hong Kong, while stateside the University of California, San Francisco doled out Oura smart rings to front-line healthcare professionals, in the hope that those devices would aid in early detection of the virus.

All of this has been well-received. A recent survey headed by the COVID-19 Healthcare Coalition showed that 83 percent of respondents regarded their virtual visits to be positive experiences, and 78 percent concluded that telehealth was capable of addressing their concerns. Those concerns were more likely to be in the mental-health realm, as one-third of all appointments have been geared in that direction, according to Athenahealth, while 17 percent have been primary-care visits.

That same organization polled providers in the summer of 2020, and they too expressed satisfaction with telehealth’s efficacy; fully 75 percent concluded that it enabled them to provide for their patients. The overwhelming conclusion, then, is that telehealth/RPM should be part of “the ‘next normal,’” as Dr. Jay Schnitzer, the coalition’s co-chair, said.

Certainly there are concerns going forward, not the least of which are the overuse of telehealth for minor issues and overprescribing of antibiotics for concerns raised during virtual visits. But the plusses seem to far outweigh the minuses. For one, there is the convenience; virtual appointments are twice as likely to occur the same day they are scheduled, in comparison to in-person visits. They are also likely to be completed with far greater dispatch.

In addition, telemedicine increases the likelihood of reaching the underserved, including the many Americans who find themselves in “healthcare deserts” — i.e., lacking immediate access to adequate care.

Amazon has already made inroads in the telehealth space, having launched a pilot program, Amazon Care, for its employees in 2019 that dealt with urgent care, vaccinations and the like. Now the plan is to expand that to primary care, and analysts expect Amazon will in the future extend its reach to other employers as well. Currently that space is dominated by Teladoc and Amwell.

Amazon’s likely plunge will be part of a larger telehealth/RPM trend that will see that market, driven by such factors as an aging population and tech’s cost benefits, go from $6 billion now to $19.5 billion by 2025. RPM alone is expected to mushroom, from its current level — $23.5 million — to $125.1 million, by 2030. And the market for in-home gadgets is expected to double in the next five years.

Simply put, the pandemic has offered only hints of the potential of telehealth/RPM. While it has been an obvious godsend for providers who have been pushed to the limit and a populace that needs to keep its distance from one another, it has much wider application as well. There is more to come, and certainly there needs to be, given the ever-changing and ever-expanding needs of all parties involved.

Leveraging Telemedicine to Reduce Liability and Improve the Patient Experience

Is a Virtual or In-Person Visit Better for You?

For Long-Term Care Centers, Telehealth Is Here to Stay — Even Once the Pandemic Ends