Alcohol and drug abuse is a serious problem on the road since it often leads to devastating accidents Ordinary vehicles are no match for large commercial trucks. Since intoxicated drivers may not be able to swerve, brake and think as normal drivers would do, the outcome of truck crashes are usually fatal.

Since the birth of the semi-truck in 1898, we have largely relied on trucking to connect our nation. The United States is connected by more than 4,000,000 miles of roads and highways, all which truckers must traverse in order to deliver more than two-thirds of all U.S trade. In 2018, a total of 4,136 people died in trucking accidents. More than 65% of the time, it is not the truckers themselves who die, but the passenger vehicle occupants with whom the wreck happened. It is not a matter of if accidents happen, it is a matter of when.

Trucking is not for the faint of heart, but it is something that can be rewarding. Whether truckers do it for the taste of adventure, traveling, or delivering goods to people in need; it is a necessary evil. It is considered one of the most hazardous jobs in the country, not only on terrain like that shown in infamous TV shows like Ice Road Truckers, but it’s dangerous on every road in the country, from summertime traffic through cities, to dark winding roads at night. 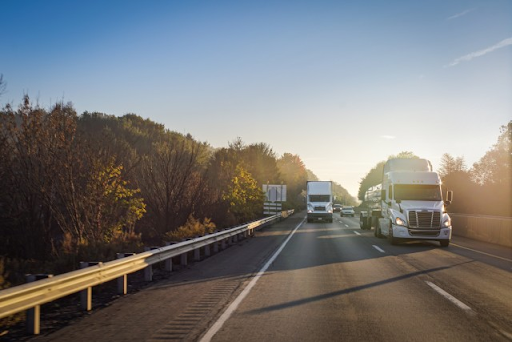 There are tons of reasons trucking accidents are among the most common accidents on the road, but there are certain factors that make trucking accidents the main cause of most fatalities. To keep the nation’s highways safer, we need to be aware of the danger trucks possess. Knowing the causes of accidents and driving defensively around semis can help to eradicate the enormous problem. If you are injured in a truck accident and suffer injuries because of it, call a truck accident attorney immediately.

Now, distracted driving is a problem amongst all vehicles. The problem is apparent and can be seen sitting in the morning rush hour. The construction worker to your right is eating McDonalds and not paying attention to the road, while the receptionist to your left is inches away from her car mirror putting make-up on. For some reason, people simply don’t want to give full devotion to the road.

This problem is especially an issue when it involves truckers. Their livelihood is to drive trucks with products safely from place to place in a timely manner. That cannot be done if the driver is distracted. The issue claims more than 3,100 lives a year, all lives that could have been saved if drivers gave their attention to the road instead of everything else. Semi-trucks are known to stop 30% slower than a regular passenger vehicle would. Distracted driving slows that percentage down even farther.

Trucking while fatigued is the number one cause of accidents. Many semi drivers are asked to drive long hours and sleep on uncomfortable cots inside the trucks. Sleep is at a premium for many drivers. Facing tight deadlines and pressure from companies can weigh heavily on truckers, which is another reason the occupation is number eight on the list of most deadly jobs in the United States.

Drivers of all vehicles face drowsy driving risks, but the risk for truckers is far greater. The size and weight of the giant vehicles causes accidents to happen far too easily. Simply swaying out of the lane and onto the shoulder could result in a flipped truck.

Truckers harassed by their employers make this problem even worse. Passenger vehicles can simply pull off to rest stops if they begin to feel tired, but truckers are pushed past their limits in order to meet ridiculous deadlines. The Federal Motor Carrier Safety Administration implemented rules for the amount of time commercial truck drivers can drive continuously, but even with the regulations, it is nearly impossible for them to be enforced.

An issue that only truckers themselves can combat is the inexperience of some drivers. Semi drivers are needed everywhere, and they’re needed quickly. Many companies are simply taking new employees and tossing them right into the fire with hardly any training whatsoever. Not all companies do this; most pay for their drivers to take specified courses that show the ins and outs of trucking. Even still, sometimes those courses are not up to par.

Greed from commercial companies is a cause for the large quantity of inexperienced drivers. Similar to all jobs, people with no experience don’t get a lot of money; people with decades of experience demand large paychecks. Due to this fact, some employers will choose the inexperienced rookie overpaying a seasoned driver.

You thought passenger vehicles were tough to take care of, try maintaining an 18-wheeler that takes cross-country journeys every week. Again, there are federal rules in place that require commercial trucking companies to maintain their vehicles up to a certain standard. Yet again, many companies fall short of what is necessary.

Blown tires, bad brakes, or ruined transmissions are all reasons proper maintenance of semis is vital. Any number of issues can arise and make trucks run off the road, or worse, into other vehicles. Companies are obligated to have their vehicles periodically serviced, but to save a few bucks, some companies will skip the services on their vehicles.

Trucking is a hard life without question. People who have lived tough lives often turn to something to ease the pain. Some find healthy answers, but many find drugs and alcohol to be their gateway. It is no secret that drunk driving is one of the most lethal things one can do in a motor vehicle. Pair that with an 80,000 pound semi full of goods, and the result is disastrous. If you are a truck driver and struggling with alcohol or drug addiction, don’t compromise yours and others safety, seek help from a drug rehab center.

As previously mentioned, trucking companies ask a lot from their employees. The constant pressure and fatigue can weigh on drivers, many of whom turn to pills to keep awake and alert. While this may not be causing accidents, it is causing harm to many blue-collar Americans. Full compliance from companies to obey the rules set in place is the only answer to this issue.

While truck drivers themselves cause many problems, so do the passenger vehicles around them. Traffic congestion is the number one issue. Semis are not built for quick stop and go actions, which creates rear-end collisions.

Defensive driving while around semis is an easy solution to the issue. Riding too closely to the tail of a semi can be catastrophic. Other things like pulling in front, overtaking, pushing, and other dangerous tactics can land you on the wrong end of a fatal truck accident.

Florida is growing daily. There are more people here today than there were yesterday and less people than there will be tomorrow. People from around the world migrate to Florida for its warm weather and beautiful nature. Unfortunately, trucking accidents are a huge concern in Florida. With the vast population of people, more trucks move in and out of the state than nearly everywhere else in the country. This creates more fatal accidents than most other states as well.

Florida ranks in the top five worst states for trucking accidents. There were 695 fatal truck accidents in 2018 alone. The state legislature has since created an enormous marketing campaign called “Share the Road”. The campaign has only helped matters, but the issue is still unsolved. While statistics hopefully recede, if you were involved in a truck accident and suffered injuries in Orlando, or anywhere in Florida, look for an experienced team of truck accident attorneys that could help you receive compensation.

The Importance of Trucking

Lest we forget how imperative truck drivers are to our nation. They deliver medicine to hospitals for the sick and dying. They deliver food to the most remote places on the map. They delve through the toughest neighborhoods and provide what is needed. Without truck drivers, we would not have the luxuries we possess. If you see a trucker today, thank him/her for the job they do.

Dennis started practicing law at just 23 years old. He obtained his undergraduate degree from Duke University and continued to earn law degrees from Florida State University College of Law and Harvard Law School. Blessed with multiple associations, memberships and awards, Dennis graduated from the Trial Lawyers College. Mr. Hernandez is one of only 1,378 attorneys who claim this distinction. ​ In 1996, he founded firm Dennis Hernandez & Associates, P.A., which concentrates in the areas of personal injury, medical malpractice and product liability. Dennis is admitted to practice law in all State of Florida courts, The Supreme Court of the United States, U.S. Court of Appeals for the Eleventh District, U.S. District Court for the Middle District of Florida, and the U.S. District Court for the Southern District of Florida.

Stay Active Series: Fun Fitness Challenges To Help You Play At Home While You Are Stay-at-home!