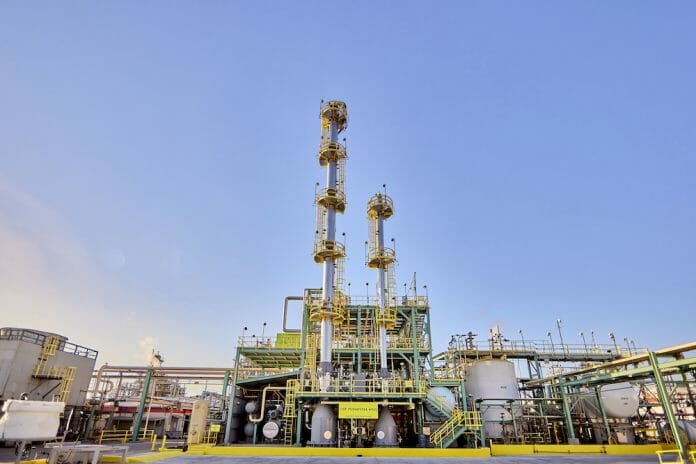 Honeywell recently announced the opening of a plant in Baton Rouge, La., that is the company’s first large-scale manufacturing site for Solstice® Air (HFO-1234ze(E) cGMP), a near-zero global-warming-potential (GWP) medical propellant for use in respiratory inhalers.

Solstice Air is a non-flammable, near-zero GWP, non-ozone-depleting, volatile organic compound (VOC)-exempt (per U.S. EPA and CARB) propellant in clinical development today for pressurized metered-dose inhalers (pMDIs). AstraZeneca, a global leader in the treatment of respiratory diseases such as asthma and chronic obstructive pulmonary disease (COPD), is working to incorporate Honeywell’s Solstice Air technology, which is being evaluated for use as a medical propellant and has up to 99.9% less GWP than propellants currently used in inhaled respiratory medicines. AstraZeneca expects their triple-combination therapy Breztri Aerosphere (budesonide/ glycopyrronium/ formoterol fumarate) to be the first medicine to transition to the next-generation propellant, subject to regulatory approval, followed by the rest of their pMDI portfolio.

“AstraZeneca’s commercial partnership with Honeywell is an excellent example of a true commitment to advancing healthcare innovation to improve outcomes both for patients and the planet,” said Pablo Panella, senior vice president, Global Respiratory & Immunology, AstraZeneca. “Through close collaboration and extensive knowledge sharing between our two companies, we are committed to bringing the next generation of inhaled medicines with near-zero GWP propellant to patients. Honeywell’s ability to escalate the production of Solstice Air at their new manufacturing site will help enable us to move quickly on this ambition once regulatory approval is achieved.”

“Honeywell is dedicated to supporting our customers’ environmental transformations with ready-now solutions,” said Ken West, president of Honeywell Advanced Materials. “The opening of this plant in Baton Rouge is Honeywell’s first site to produce medical grade propellant and our continued work with AstraZeneca offers a critical moment to highlight how Honeywell’s Solstice technology plays an important role in helping the pharmaceutical industry meet its sustainability goals while supporting essential care for respiratory patients worldwide.”

Honeywell has invested more than one billion dollars in research, development and new capacity for its Solstice technology, having anticipated the need for lower-GWP solutions to combat climate change more than a decade ago. The Solstice product line, which helps customers lower their greenhouse gas emissions and improve energy efficiency without sacrificing end-product performance, includes refrigerants for supermarkets, air conditioning for cars and trucks, blowing agents for insulation, propellants for personal and household care and solvents for cleaning solutions.

Using Honeywell Solstice technology has helped avoid the potential release of the equivalent of more than 295 million metric tons of carbon dioxide into the atmosphere so far, equal to the carbon emissions from nearly 688 million barrels of oil.

Honeywell is committed to achieving carbon neutrality in its operations and facilities by 2035 and recently announced a new set of commitments that further advance its sustainability goals, including committing to set a science-based target with the Science Based Targets initiative (SBTi) that will include scope 3 emissions and participation in the U.S. Department of Energy’s Better Climate Challenge. The company also supports the Paris Climate Agreement. These efforts build on the company’s track record of sharply reducing the greenhouse gas intensity of its operations and facilities as well as its decades-long history of innovation to help its customers meet their environmental and social goals. In 2021, approximately 60% of Honeywell’s new product introduction research and development investment was directed toward products that improve environmental and social outcomes for customers.

For more information about sustainability at AstraZeneca, visit: https://www.astrazeneca.com/Sustainability.html

AOPO Launches New Foundation and Names Board of Directors