Will 2023 be a Turning Point in Payor-Mandated White Bagging?

Patient steerage is not a new issue; however, its prevalence is increasing as payors get more creative in ways to increase their profits. Patient steerage is when payors use their relationships with providers or pharmacies to steer patients to specific providers that are “preferred” by payors because the payor has an implicit financial interest in reimbursing for services rendered by that specific provider. A common type of patient steerage is White Bagging. White Bagging refers to the distribution of patient-specific medication from a pharmacy, often a specialty pharmacy, directly to a physician’s office, hospital, or clinic. Providers receiving White Bagged drugs are expected to administer the drugs to the patient. The Pharmacy Benefit Managers (“PBMs”) involved in White Bagging require contracted hospitals to buy certain drugs from the payor-approved pharmacy at a price set by the payor, and/or require patients to obtain covered drugs from a narrow subset of covered pharmacies. PBMs often reimburse for drugs obtained from non-approved pharmacies at a lower rate. While this practice does benefit payers, it raises significant concerns for hospitals and patients.

Payer mandated White Bagging can jeopardize the safety and efficacy of drug use because providers are removed from the preparation, handling, and administration of prescription drugs. In a hospital setting, internal policies adopted to ensure drug product integrity, including drug transport and handling, are bypassed when drugs are White Bagged. A patient’s medication list could be excluded from the hospital’s system and hospital-based providers may not be able to advise patients on drug interactions and potential side effects. Patient experience can be further disrupted because a provider may not be able to supply a drug timely if needed in an emergency. White Bagged drugs are supplied in a premade form and hospital-based providers may not have immediate access to drugs with the appropriate quantity, dosage, or concentration for what is needed. Hospitals may be exposed to a greater risk of liability because of these White Bagging concerns.

Additionally, White Bagging has the potential to disrupt a hospital’s revenue cycle. Under the traditional buy and bill model, hospitals receive a percentage of the revenue per drug sourced, while under the White Bagging model, payors retain all associated revenue. In effect, this modifies the rate structures that were contracted by the providers and payors. Because the result is underpayment to hospitals, hospitals may need to compensate for loss of revenue by cutting costs in other areas or increasing their reimbursement rates.

White Bagging and similar PBM practices have attracted the attention of state legislators and policy makers, as well as advocate groups across the country. In just the past two years, many states have considered bills on White Bagging, and a few states have passed such laws.

Within state legislation targeting White Bagging, there are a few trends. One approach is for states to place a downright ban on White Bagging. A second approach is to target PBM practices in general. A third approach is to allow White Bagging in some instances but set restrictions on it. Some states introduce White Bagging legislation as part of a comprehensive PBM package, while other states simply focus on White Bagging. While each of these approaches have benefits to them, bills addressing one specific target issue are more likely to be passed because time barriers that are faced when complex legislative proposals are considered by committeesis eliminated. Additionally, with a strict ban on White Bagging, states can avoid the necessary considerations and additional costs that come with heightened enforcement when a practice is allowed in some circumstances but not in others.

In Florida, the State Senate introduced a bill in January 2022 that concisely addressed White Bagging issues by placing a strict ban on White Bagging. See Florida, SB 748 (2022). Notably, the proposed bill stated that a payor cannot refuse to authorize, approve, or pay a participating provider for providing covered clinician-administered drugs and related services to covered persons. The proposed bill also prohibited a payor from interfering with a patient’s right to choose health care providers and pharmacies for clinician-administered drugs, including imposing an additional cost for obtaining a drug from a non-preferred pharmacy. Although this bill was strong to address White Bagging practices, the bill died in committee in March 2022.

As more states continue to look towards protecting patients from White Bagging practices, it is important for states to consider other areas of patient steering too. The already adopted legislation may lay the framework for new laws to address other types of patient steerage issues, such as narrow provider networks and site of care policies. Hopefully, legislators will continue to address these important healthcare issues during the upcoming 2023 legislative session. 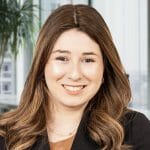 Rebecca’s versatile background in medical research, academic analysis, and hands on experience on the provider side, purveys unique perspective when working closely with the firm’s healthcare clients to solve legal matters.

"I believe legal counsel should hold themselves to the highest level of integrity and dedication to help achieve client goals and establish strong, mutually beneficial relationships."

After discovering she could mold her passions for healthcare and policy into one as a lawyer, she launched her legal career and worked as a summer law clerk for the Cook County State’s Attorney’s Office, legal intern at Hercules Pharmaceuticals, Inc., and at the Maurice A. Dean School of Law at Hofstra University as a research assistant exploring laws relevant to bioethics.

Rebecca dedicated the majority of her legal research tenure to exploring policies surrounding the storage/disposal of embryos and gametes, and legal protections offered to people with disabilities seeking healthcare benefits.

In her free time, Rebecca enjoys spending time with her family and helping her friends and colleagues launch non-profit organizations.

This author does not have any more posts.