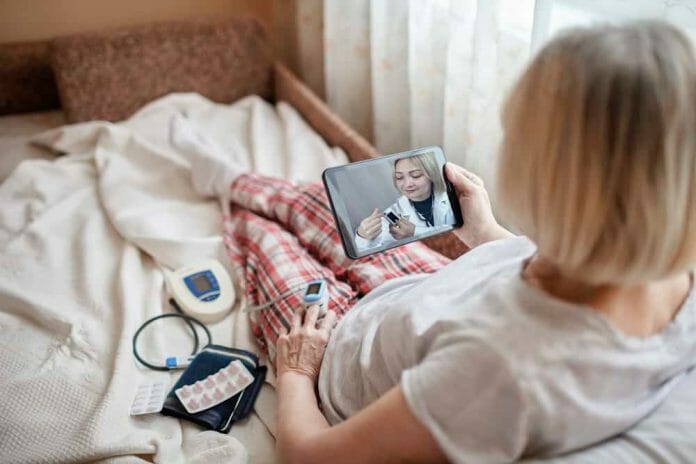 In the last two decades, wearable medical and fitness devices – such as activity trackers, blood sugar monitors, blood pressure cuffs, and heart rate monitors – became popular through physician adoption but also with the introduction of many well-known, heavily marketed off-the-shelf solutions such as Fitbit and Apple watches. You can’t go to the gym, a store, or your doctor’s office without seeing someone using a wearable medical device, and that doesn’t include the ones concealed under clothing. As of January 2020, the Pew Research Center reported that one in five Americans are wearing a smart watch or fitness tracker and that figure has expectedly grown since then. While we’ve seen significant advances in wearable technology, there remain notable improvements beyond just wearables yet to come.

What is remote patient monitoring (RPM)?

Remote patient monitoring (RPM) is a technology to enable monitoring of patients outside of conventional clinical settings, such as in the home or in a remote area, which may increase access to care and decrease healthcare delivery costs. RPM refers to the specific technology used to electronically transmit information between patients and physicians, and it is just one delivery system within the broader telemedicine industry.

Healthcare providers understand the potential of RPM as a key component in the evolution towards more proactive, continuous models of care. By 2025, one report estimates that the number of U.S. remote patient monitoring users will almost double to 70.6 million – more than one-quarter of the population. This growth will be facilitated by the continued push to move patient care into patients’ daily lives, rather than being relegated to the four walls of the doctor’s office or healthcare facility.

But as new devices are being developed, one questions needs to be top of mind – who are we designing these products for?

Evolving the Designs of RPM Devices

Success stories – the future of RPM

Despite the many challenges with RPM design, we can celebrate tremendous innovation. In February, the IEEE Standards Association recognized nine trailblazing and innovativefinalists who competed in the IEEE SA Telehealth Virtual Pitch Competition hosted by IEEE SA Healthcare and Life Sciences Practice and the IEEE SA Transforming the Telehealth Paradigm Industry Connections Program. The competition officially launched the last week of November 2021 and within two short months, more than 30 submissions were received from a well-balanced mix of tech entrepreneurs, academia and commercial entities from across the globe innovating the future of RPM. The IEEE SA Telehealth Virtual Pitch Competition is designed to showcase not only the innovation but also solutions to ongoing challenges of accessibility, feasibility, inclusivity, adaptability, security, and privacy to transform RPM into a patient-centered healthcare system. It placed an impetus on meeting a robust set of criteria, challenging entrants to think beyond the device and position the patient at the center of the process.

I encourage you to read about these amazing innovators, which not only should be recognized for their ingenuity but also for encouraging the advancement of RPM technologies and systems to improve healthcare delivery for all patients.

Maria Palombini currently leads the IEEE SA Healthcare & Life Sciences Practice working with a global community of stakeholder volunteers who are committed to establishing trust and validation in tools and technologies that will change the approach to discover therapies, deliver care, and ultimately enable a sustainable and universal quality of care for all. She holds a B.S. and B.A. from Rutgers College and an M.B.A. from Rutgers Graduate School of Business at Rutgers University.