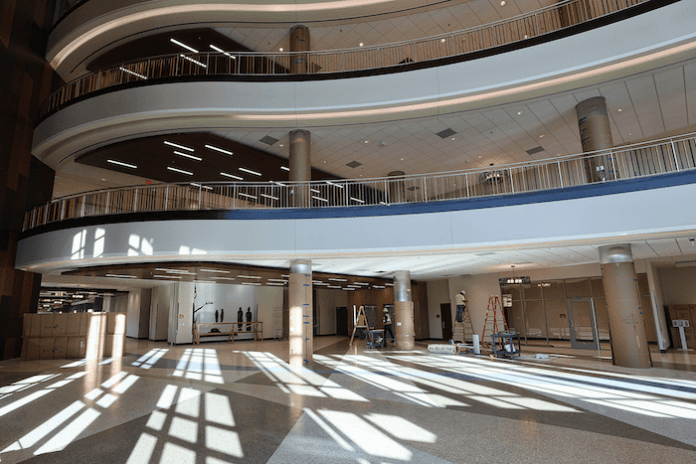 While the need for adequate healthcare services, especially in underserved communities, is always a hot topic, one group is often overlooked in the conversation. Native Americans, who often live in rural communities on or near their tribal lands, frequently experience long-distance commutes to obtain even the most basic healthcare services with little to no access to anything more comprehensive.

According to Indian Health Services (IHS), an agency within the U.S. Department of Health and Human Services,  American Indians have a life expectancy of 5.5 fewer years than all other races of the U.S. population. Sufficient care for this community is more vital than ever, and one partnership has helped a Native American tribe progress in providing state-of-the-art care for its members.

Harrison, Walker & Harper, LLC (HWH), a leading construction services firm headquartered in Paris, Texas and McKinney, Texas, partnered in 2019 with the Cherokee Nation to program manage the expansion of the W.W. Hastings Medical Campus on tribal land in Tahlequah, Okla. As the largest Native American tribe in the continental United States, with more than 300,000 members nationwide and more than 141,000 in Oklahoma alone, the tribe focused on significantly adding to and upgrading its medical facilities to ensure its members receive accessible, high-quality healthcare.

The first of the two expansion projects on the campus, the Cherokee Nation Outpatient Health Center,   is the largest tribal outpatient clinic of its kind in the nation at 469,000 square feet. It serves as the main healthcare facility for Cherokee tribal members and is expected to service more than 1.3 million patient visits per year. In addition, HWH also provided program management for the Oklahoma State University (OSU) College of Osteopathic Medicine at the Cherokee Nation, adjacent to the new outpatient center and the first school of medicine located on native tribal lands.

It was HWH’s deep expertise in working with Native American tribes that first formed the partnership with the Cherokee Nation. Beginning in 2012, HWH successfully built four regional Cherokee Nation healthcare clinics throughout Oklahoma, developing a strong reputation and earning the trust of the tribe. In addition, several HWH employees previously worked directly for a variety of Native American tribes. For example, a key member of the HWH finance team, who oversees audits for all change orders and pay applications on the construction projects, previously worked for the Choctaw Nation. Because of her specific experience, she easily verified all necessary expenditures that saved the owner time and kept the nearly $200 million project on track.

Further, by providing oversight support on budgets, HWH and the Cherokee Nation together identified savings opportunities that not only corrected projected overages but saved additional dollars that brought the final project in under budget.

According to Mark Murphy, vice president of program management for HWH and a former operations director for Chickasaw Nation Industries, “Our experience and understanding of the Cherokee Nation and their construction needs combined with our day-to-day management is where we were able to really add value in successfully delivering these projects.”

While the new health center was built using designated tribal funds, IHS entered into a joint venture agreement with the Cherokee Nation to develop the new healthcare facility as an outpatient center, serving more patients in need of varying levels and types of care. The venture, the largest-of-its-kind to date between the federal government and a Native American tribe, provides a grant from IHS that guarantees coverage of operation costs for the center for 20 years at up to a $100 million per year. To ensure that the specific construction requirements of the grant were fulfilled, HWH closely followed a set of parameters outlined by IHS when developing the new outpatient center.

Completed in 2020, the full-service facility features the most advanced medical equipment available and includes a specialty clinic with 33 dental chairs, six rooms for vision exams and three audiology testing booths, as well as an ambulatory surgical center with five surgical and two endoscopy suites. The health center also features space for rehabilitation services, behavioral health and a personal wellness center.

As part of the outpatient facility build, a simple, easy-to-use wayfinding system was implemented throughout the facility that could accommodate a population either unfamiliar with navigating large medical facilities or who are at a reduced literacy level. HWH worked with the building architect on a comprehensive approach that maximizes natural light through an all-glass front façade. This, combined with greeter stations and color-coded markers that direct patients throughout the building, ensures clear sightlines and reduces the intimidation often felt by many Native Americans visiting large healthcare facilities.

Similarly, the new OSU medical school focuses on supporting the tribal community’s traditionally underserved healthcare needs. To combat this historic challenge, the school focuses primarily on training native Cherokee tribe members as medical professionals who are encouraged to remain in the region and develop their careers by serving the healthcare needs of their fellow tribe members.

In developing the first, ever, tribally affiliated medical school in the country, both doctor and staff surveys were issued regarding facility design requests to ensure that the school could not only offer an appropriate training ground to develop highly qualified doctors but that it could also serve the Cherokee Nation for generations to come. HWH worked together with OSU, the Cherokee Nation and the building architect to evaluate each request and incorporated priority elements into the final 87,000 square-foot structure. The school currently enrolls 54 students in its first program class.

Currently, HWH is completing its seventh project for the Cherokee Nation in Stilwell, Oklahoma. These clinics, the W.W. Hastings Outpatient Center and the OSU College of Osteopathic Medicine at the Cherokee Nation, are a step toward providing a historically underserved population with the critical resources and medical care they need and deserve.