Recognizing and Responding to Racial Microaggression at Work 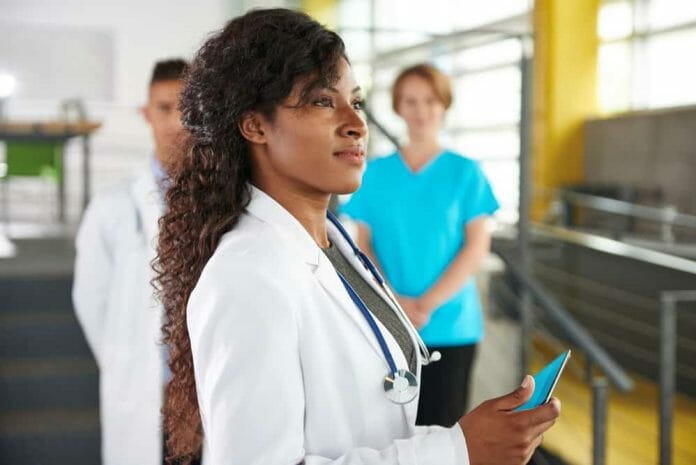 Take a breath in. Take a breath out. It’s going to be okay. We’re about to dive into concepts about race, discriminatory behavior, and reactions. For far too many people leading healthcare organizations, these topics are too hot or too fraught to deal with, and so we do not get the necessary information or are not informed by evidence-based best practices to change the working experience of our employees or patients. So breathe with me for a few seconds.

According to Stanford neuroscientist, Mark Krasnow, when we take intentionally slow breaths, we’re actually utilizing our only conscious connection to our amygdala (the part of our brain responsible for our fight, flight, or freeze response). There are 150 respiratory pacemaker neurons (out of approximately 86,000,000) that communicate to our amygdala that we’re okay.  Since we can intentionally control our breathing, we can consciously (and effectively) calm our fear and anxiety with breathing.

Understanding this is interesting to be sure, but it is also a critical tool when leading an organization through discussions and topics that are oftentimes emotionally taxing. Monitoring your own stress response as well as the potential stress responses of others will increase your ability to create the desired changes. When discussing topics like bias, discrimination, privilege, and microaggressions, people often have strong preconceived notions and emotion-based judgments. Just know and reassure them that the ultimate goal of discussing these topics is to make the world a more caring and understanding place. Given all that, let’s take another breath, and dive in.

To really understand what we’re talking about, we need to move beyond our previous understanding of the word aggression. According to Psychology Today, a microaggression is a “subtle, often unintentional, form of prejudice.” Contrast that with overt discrimination like racism, sexism, ageism, homophobia, transphobia, etc. microaggressions are often colloquialisms, offhand comments, jokes, or assumption-based reactions. One thing to note about microaggressions is in many cases, folks affected by them have been around them for so long, that they have developed coping mechanisms to deal with them, and will not call them out or even react adversely. In practice, this may show up as a person (let’s call him Karl) making the same comment, “angry Black woman” in the presence of folks (including Black women) his entire life. Until now, nobody has said anything to him indicating that it was in any way offensive, and then apparently all of a sudden, someone speaks up. The comment that Karl has been making is a microaggression, but (and this is important) Karl has decades of experience reinforcing that his behavior is NOT offensive. This cognitive dissonance makes it difficult for Karl to trust in the very concept of microaggressions and thinks that this issue is more likely an acute issue with one person who is just too sensitive rather than an issue with his behavior.

In the healthcare world, assumption-based microaggressions are widespread and have a significant impact on patient and employee satisfaction. There are more obvious examples of assumption-based microaggressions like the assumed gender of nurses. Seriously, people in the general population identify people in this profession as “nurses” and “male nurses.” But some of the more insidious assumption-based microaggressions have to do with race. Phrases like, “You’re so well spoken” and “You’re very articulate” are phrases most often levied as compliments to BIPOC (Black, Indigenous, People of Color) populations. Many folks often ask, “how can a compliment be a microaggression?” Well to understand why it is a microaggression, we need to explore the underlying assumptions. Why is this phrase most often delivered to people of color? Because the assumption is that due to their perceived race, they are NOT likely to be articulate. So, when someone speaks, it stands out in the mind, triggering surprise, attention, and a compliment. The problem isn’t the compliment, the problem is the foundational assumption that triggered the compliment. It is the assumption, not the evidence present, that builds future assumptions. “You are so well-spoken” is what is communicated verbally, but what is unintentionally and subtly communicated is, “I am surprised that you talk properly, you are a wonderful exception to the rule.”   Rather than changing the rule (assumption), we highlight this person as an exception. Let this concept backed by decades of psychology research sink in: We often do not take evidence that challenges our assumptions as a reason to change our assumptions, rather we assign it as an outlier.

Other racial microaggressions are throwaway comments like, “When I see you, I don’t see color” or “It’s so hard to find a qualified BIPOC candidate.” These are detrimental in different ways but both harmful. The former invalidates the real-life societal color-based experiences of BIPOC. The intention is, “When I see you, the color of your skin isn’t the most important thing.” Which is honorable to be sure. But the thing that folks don’t understand is that many BIPOCs has had challenging experiences over the course of their lives, sometimes these experiences have taught life lessons or have shaped important character traits. If someone doesn’t see color, then they don’t see the completeness of the person. The latter both diminishes the value and effort put forth by any current BIPOC employees, subtly implying that the reason they were hired was for “diversity” reasons, and it reinforces a long-standing trope that the standard of qualified employees is non-BIPOC and a qualified BIPOC is an exception to the rule. Now, there is a lot of evidence to the contrary. Studies have looked at graduation rates vs. hiring rates based on race – holding all other variables constant – and the rates do not match; meaning that in many fields, there is a larger pool of “qualified” BIPOC graduates than are being hired.

Side note: if by chance, someone truly believes the assumptions behind these racial or other microaggressions, then we should have an entirely different conversation.

When racial microaggressions like these and many others fly around our places of work, the practical impact is that over time, they become a part of our culture – how we do things. They become ubiquitous and, by extension, expected. A mentor of mine named Randy Currier Ph.D., who served as the VP of Organizational Development and HR for a rapidly growing healthcare firm, shared with me one of the most simple yet profound concepts about organizational culture, “We promote what we tolerate.” If we observe or experience a word or behavior and tolerate it, our reaction to tolerance can be perceived as tacit approval. The person who exhibited this behavior may conclude that we have no issue with it and be emboldened. We don’t need to participate in the behavior or even laugh at the joke, just by tolerating it, it may be perceived that we support it.

When dealing with microaggressions, it is critical that, as often as possible, they are addressed, understood, and corrected. This is where understanding the amygdala comes into play. When correcting behavior, one of the most common responses is the fight, flight, or freeze response, more commonly known as a defensive reaction. When folks react defensively, they are physiologically expressing that they feel under attack. When folks react defensively, the likelihood that they are going to respond productively to your request for behavior change is unlikely. To effectively change behavior (racial microaggressions) a leader or peer is best suited to draw a clear distinction between the behavior, the character of the person, and the underlying assumption. Once this is fully understood, the judgment of the behavior is less likely to be perceived as a judgment of character, lowering the chance of defensiveness.

Racial microaggressions are unfortunately common in the workplace and, just like other common microaggressions (gender, sexual orientation, age, physical/mental ability, etc.), the more awareness we can bring to their impact on people and on our organizations, the better able we are to create ideal working environments. In an industry where turnover, vacancies, and recruitment consume far too much time, energy, and capital, creating the rare ideal working environment is one small way that we can change the world. Breathe in, breathe out, you can do this!